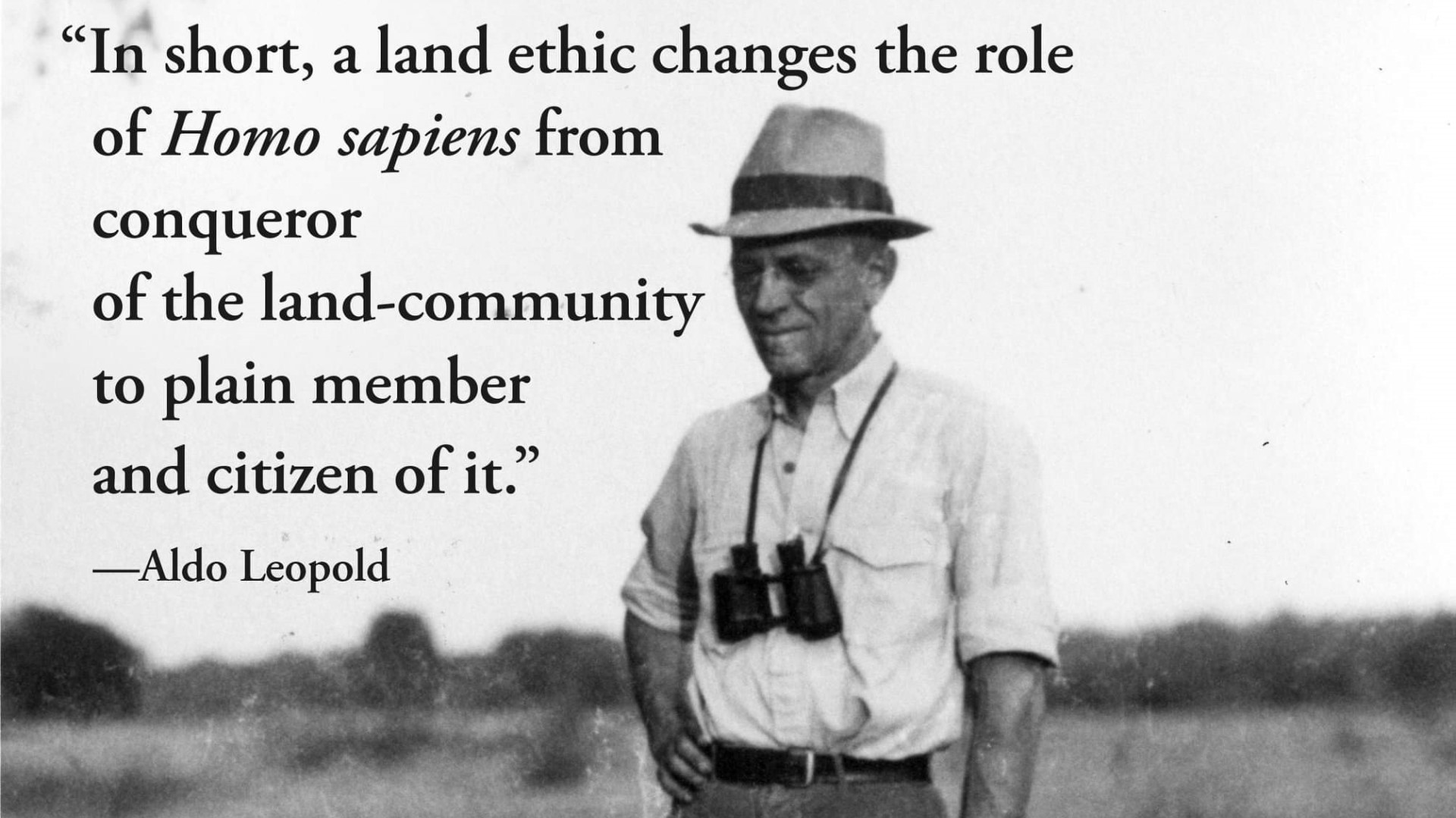 A former chicken coop is today both a National Historic Landmark and on the National Register of Historic Places. Located near Baraboo, Wisconsin, “The Shack,” as it’s come to be known, was the weekend retreat of Aldo Leopold (1887-1948) and his family. Converted into a small cabin, it’s also the place where Leopold wrote much of his famous book, A Sand County Almanac, one of the most influential works of the 20th Century on the conservation of wildlife and natural resources. Translated into 14 languages, it has sold more than 2,000,000 copies to date.

Born and raised in Burlington, Iowa, Leopold developed an interest in the natural world at an early age, spending hours observing, journaling and sketching the wild animals and plants he saw. His sister, Mary, said of him, “He was very much an outdoorsman, even in his extreme youth. He was always out climbing around the bluffs, or going down to the river, or going across the river into the woods.”

After graduating from the Yale Forest School in 1909, Leopold pursued a career with the newly established U.S. Forest Service, stationed in Arizona and New Mexico. By age 24, he had been promoted to supervisor of the Carson National Forest in New Mexico. In 1922, he was instrumental in developing the proposal to manage the Gila National Forest as a wilderness area—the Gila eventually became our country’s first official wilderness area in 1924.

Like most of America’s early conservationists, Leopold was also a hunter. While living out West, he hunted mainly predators and big game. Later in life, he preferred bird hunting in Wisconsin, chasing ruffed grouse and woodcock each autumn with a shotgun and birddog, “when the tamaracks turned smoky gold,” as he termed it.

Leopold’s essay, “Thinking Like a Mountain,” appears in A Sand County Almanac, and tells the story of his change of heart concerning predators:

“My own conviction on this score dates from the day I saw a wolf die. We were eating lunch on a high rimrock, at the foot of which a turbulent river elbowed its way. We saw what we thought was a doe fording the torrent, her breast awash in whitewater. When she climbed the bank toward us and shook her tail, we realized our error: it was a wolf.

“In those days, we never heard of passing up a chance to kill a wolf. In a second we were pumping lead … but with more excitement than accuracy: How to aim a steep downhill shot is always confusing. When our rifles were empty, the wolf was down.

“We reached the wolf in time to watch a fierce green fire dying in her eyes. I realized then, and have known ever since, that there was something new to me in those eyes—something known only to her and to the mountain. I was young then, and full of trigger-itch; I thought that because fewer wolves meant more deer, that no wolves would mean a hunters’ paradise. But after seeing the green fire die, I sensed that neither the wolf nor the mountain agreed with such a view.”

The wolf incident was the beginning of Aldo Leopold forming his Land Ethic, part of which includes the appreciation of the role predators play within an ecosystem. He eventually came to understand that deer need predators as much as predators need deer. In essence, wolves and other predators keep deer numbers in check so that the herds don’t overpopulate, destroying the habitat and ultimately themselves.

The classic example of just such a misguided management strategy to “improve” deer hunting was the boom-and-bust scenario that occurred on the Kaibab Plateau on the North Rim of the Grand Canyon beginning in 1906. For the next 25 years, nearly all the large predators in the area were systematically eliminated by government hunters and trappers. An astounding amount of wildlife was killed by shooting, trapping or poisoning: 781 mountain lions, 30 wolves, 4,889 coyotes, 554 bobcats, plus an unknown number of eagles!

By 1918, the Forest Supervisor was reporting a declining food supply as a result of too many deer. By 1924, an estimated 1,700 deer could be counted feeding in one meadow alone during summer evenings. The total deer herd by then was now perhaps 100,000. Not surprisingly, the deer population eventually crashed due to starvation and disease. It then took decades for the habitat to recover to the point that the region once again supported deer, predators and other wildlife in a healthy, self-sustaining ecosystem. Lesson learned.

Thanks to Aldo Leopold and other innovative conservation leaders of the early 20th Century, wildlife biologists and managers today use a more informed, holistic approach to wildlife management. Defined as the process influencing interactions among and between wildlife, its habitats and people, wildlife management attempts to balance the needs of wildlife with the needs of humans using the best available science. Leopold’s Land Ethic, according to today’s Aldo Leopold Foundation, is similar. “At its core, the idea of a land ethic is simply caring: about people, about land, and about strengthening the relationships between them.”

In 1933, Leopold left the Forest Service to accept a college professorship at the University of Wisconsin. His title was Professor of Game Management, the first such position ever created not only at the U of W, but at any college or university across America.

It was during this same period that Leopold published his first textbook, Game Management. Dedicating the tome to his father, who had taught him sportsmanship and to hunt, he quoted the following heartfelt poem on the dedication page:

“How oft against the sunset sky or moon

We watched the moving zig-zag of spread wings

In unforgotten autumns gone too soon,

On a personal note, during the early 1970s I was assigned to read Game Management while studying for a wildlife management degree at Ohio State University. I have since acquired a hardback copy of the book’s second printing (1936), which sits in a prominent place above my writing desk. I had the book appraised a dozen years ago, and at that time it was worth about $200. No doubt, it has only increased in value since then, and is one of the most prized volumes on my bookshelf.

Aldo Leopold died suddenly of a heart attack while battling a grassfire on his neighbor’s property. A Sand County Almanac was published posthumously the next year, in 1949. To learn more about Aldo Leopold, his Land Ethic, or to schedule a visit to “The Shack,” go online to the Aldo Leopold Foundation: https://www.aldoleopold.org/.