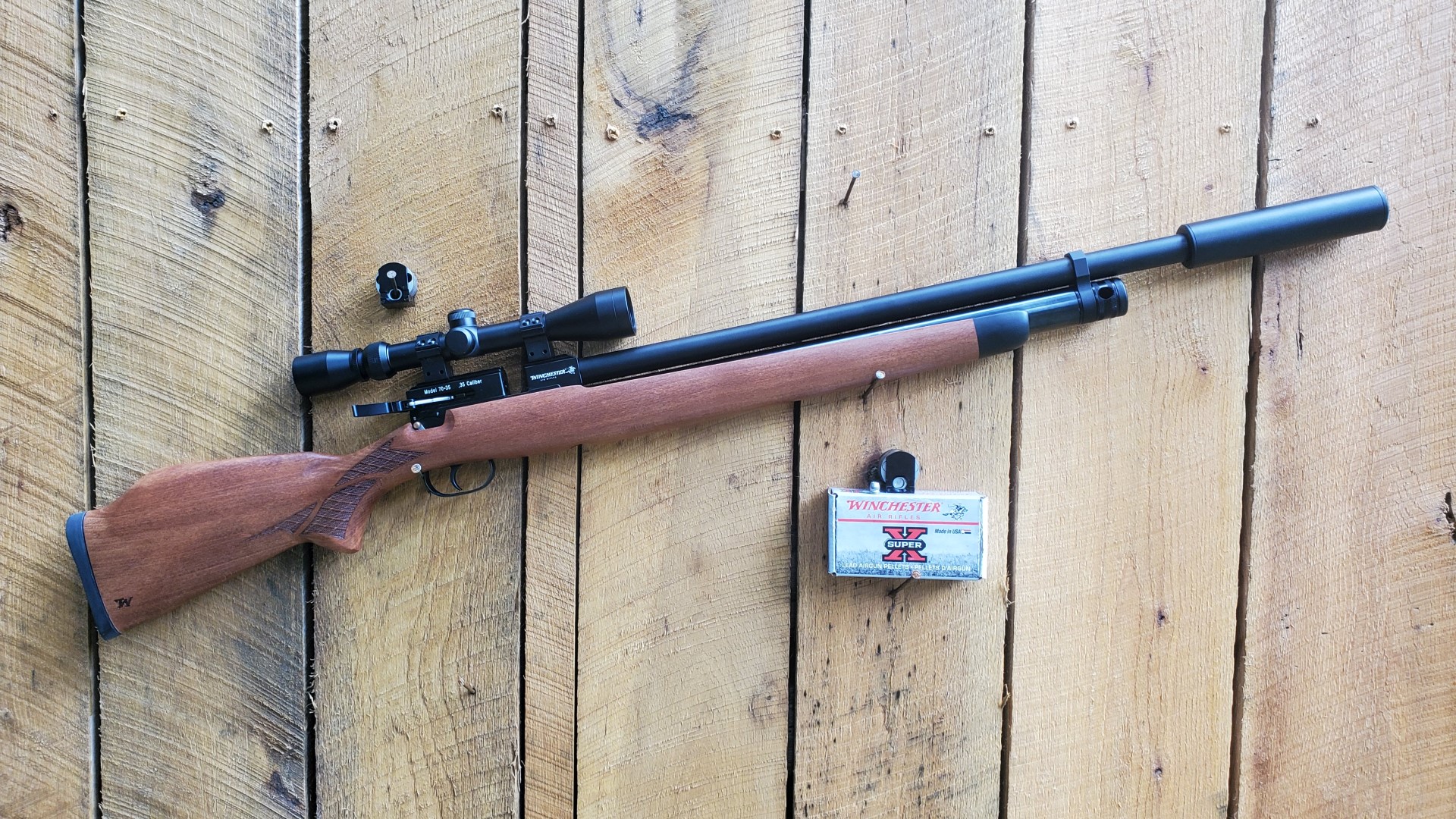 Airguns, including big-bore airguns, have been around for a long time. Big bore air rifles are in a category totally of their own—some of which can take down deer-sized game. In the past six months or so I have worked with a few, as the idea of using an air rifle on deer, foxes, coyotes or even hogs intrigues me. The most recent example I’ve reviewed is the Winchester Model 70/35. If you have never shot a big bore air rifle, you really need to try one … and you can’t go wrong starting with the Winchester Model 70/35.

Out of the box

Right out of the box this air rifle impressed me. Although it was a bit heavier than some of the air rifles I have shot, the extra weight was worth it for the gorgeous beechwood stock and well-fitted parts. This rifle looks like a professional grade crafted tool. The pressure gauge is conveniently located under the stock, but out of sight so as not to detract from the classic look of this rifle. I put a CV LIFE 3-9×40 scope on the rifle. The scope is not expensive at all, but given the number of rounds it helped me put downrange with accurate movement of point of impact I decided to get another one.

Once the scope was mounted I charged the air rifle with the included adapter and loaded the magazines with Winchester .35 caliber 95-grain hollowpoints and went to my range. I began with a target at 25 yards and took the first few shots. This rifle was blissful to shoot right out of the box! The trigger is incredibly smooth and crisp—hands-down the best air rifle trigger I have ever pulled.

As for report, the rifle cracks less than a .22, but it is loud enough that if you live near someone they are going to wonder what you are doing, no doubt. (As always, eye and ear protection are required!) Cocking the rifle is easy. Fully chambering the pellet takes a firm push on the side lever, but nothing over the top by any means.

Shots were consistent magazine after magazine with only one or two thrown outside of 1.5 inches … and I am quite sure that was my doing. I shot this rifle nearly 100 times in one sitting because it was so enjoyable. Charging it did not take that long, just five minutes or so on my powered compressor. I shot three magazines before I went to recharge the rifle each time, and I think I could have squeezed out a few more shots had I wanted to do so. Shots at 25 yards were in the same hole or touching.

I moved the target out to 50 yards and had approximately 1-inch groups time and again. Moving the target out a tad further the groups were still very impressive at less than 2 inches.

I would feel very comfortable shooting predators, groundhogs or nuisance animals with this at ranges up to 100 yards. I had hoped to get a shot at a deer with my special deer permit, but I wanted to keep my shots on deer at 50 yards or less. I did not get that opportunity yet. (Hopefully I will get a chance later this season.) This rifle groups very well!

While shooting at longer ranges with the sun behind me filtering through the trees, I could get glimpses of the pellet in flight from time to time much like you can sometimes see a crossbow bolt. Still, the pellets impacted my target well within the vital zone for hunting all the time.

The nice thing about a .35 caliber is that there are a slew of pellet choices out there. Honestly, the 95-grain hollowpoint Winchesters shot so well I did not try a bunch of other brands or weights. I would caution readers to make sure any pellets you purchase will fit in the magazine. Some pellets I had are too long to fit and be loaded into the rifle. Again, you cannot go wrong with the Winchester 95 gain hollow points based on my experience.

I was pleasantly surprised how these pellets ripped through the wooden slats of my target frame, so the thin skin of a predator shouldn’t be a problem. Take careful shots to hit vitals and you should be able to remove pests, no issues. However, remember that these pellets are going approximately 800 feet per second or less, so it is conceivable that the animal may hear the shot just before impact and duck if shot at longer ranges. So, keep that in mind if deer hunting with it.

In summary, this is the best rifle I have shot all year that is air powered. It is a joy to shoot and accurate too. The instructions are basic, but adequate. If you are looking for a classy, big bore, accurate air rifle, look no further. The Winchester 70/35 will more than leave you satisfied. MSRP $840; WinchesterAirRifles.com

Capacity: Internal cylinder holds up to 230 bar of pressure

Sights: but has an 11mm dovetail groove for mounting a scope.

Comes with a 1-year warranty.