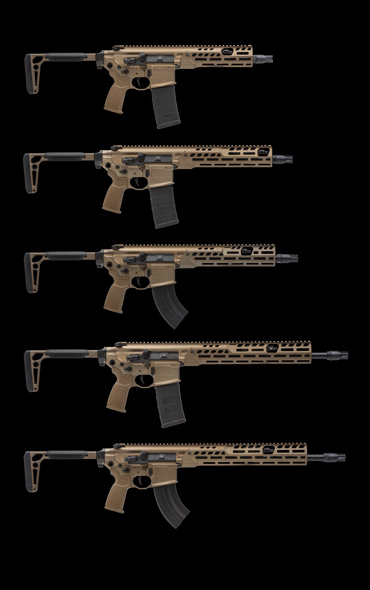 The SIG Sauer MCX-SPEAR LT rifle weighs between 5.6 and 7.6 pounds, depending on the model. All have a Coyote Anodized finish.

A new latch system was developed for the MCX-SPEAR LT so that it can cycle many types of 7.62×39 mm ammo reliably.

The SIG QD suppressor-ready flash hider is optimized for SIG QD suppressors, and there is also a SIG flatblade match trigger. Additionally, the MCX-SPEAR LT will accept AR-15 style triggers.

With a lightweight ergonomic handguard and push-button folding stock with cheekrest, the MCX-SPEAR LT rifle also has fully ambidextrous controls including bolt catch and release.

In addition, this rifle is optics ready, and can be quickly paired with a SIG Sauer ROMEO8 or TANGO6T optic.

About the design of the new MCX-SPEAR LT, SIG Sauer says it “incorporates the best of both generations and is the culmination of the latest research, development and innovation in the MCX platform.”