The 2022 USPSA Classic Nationals, sponsored by Ruger, were held May 21-22 at the CMP Talladega Marksmanship Park in Talladega, Alabama. There were 263 competitors coming out to shoot Limited 10, Single Stack and Revolver divisions. All the legendary names we know and love attended the match, but the National Champions of each division won by more than six to eight percent over second place.

What I love most about the USPSA Classic Nationals is seeing all the 1911s that I grew up around as a kid. For my dad, grandpa and other family members, a 1911 handgun was a household staple, just like butter or flour. Revolvers have a long history as well, and it’s important that we preserve these iconic American guns with the shooting sports.

This year’s USPSA Classic Nationals was a 15-stage match shot in a half-day format. The stages varied in round count and style. Most dreaded of all—the all-steel 24-round stage where many shooters ate their lunch. One of the most intriguing stages this year was a visual start stage that, for a few shooters, was their first time having a visual start—and an on-the-ground low port made for a fun end to one stage.

Stage 1, the aforementioned all-steel stage, was simple, and yet it was easy to get lost in the walkthrough process. This stage included numerous windows to which multiple arrays of targets could be shot through and was a “start anywhere in the shooting area” start, which gave shooters options to shoot it in a way that was best for them. The fastest stage time was 20.69 seconds by Dave Sevigny shooting Single Stack.

The majority of swingers, bobbers and clamshell targets were open paper targets, except for a few that were partials. Even with most targets being open paper, they still presented a challenge. Two stages, Righty Tighty and Lefty Loosey, were all paper with a few no-shoots. The last three targets of both stages had to be engaged strong-hand- or weak-hand-only, respectively. The start position for both was in the middle of the shooting area with feet touching marks. The three target arrays were set up on the outside left side of the shooting area, the outside right side of the shooting area, and downrange. Some competitors chose to start on the downrange target array while others retreated to shoot the outside arrays first. 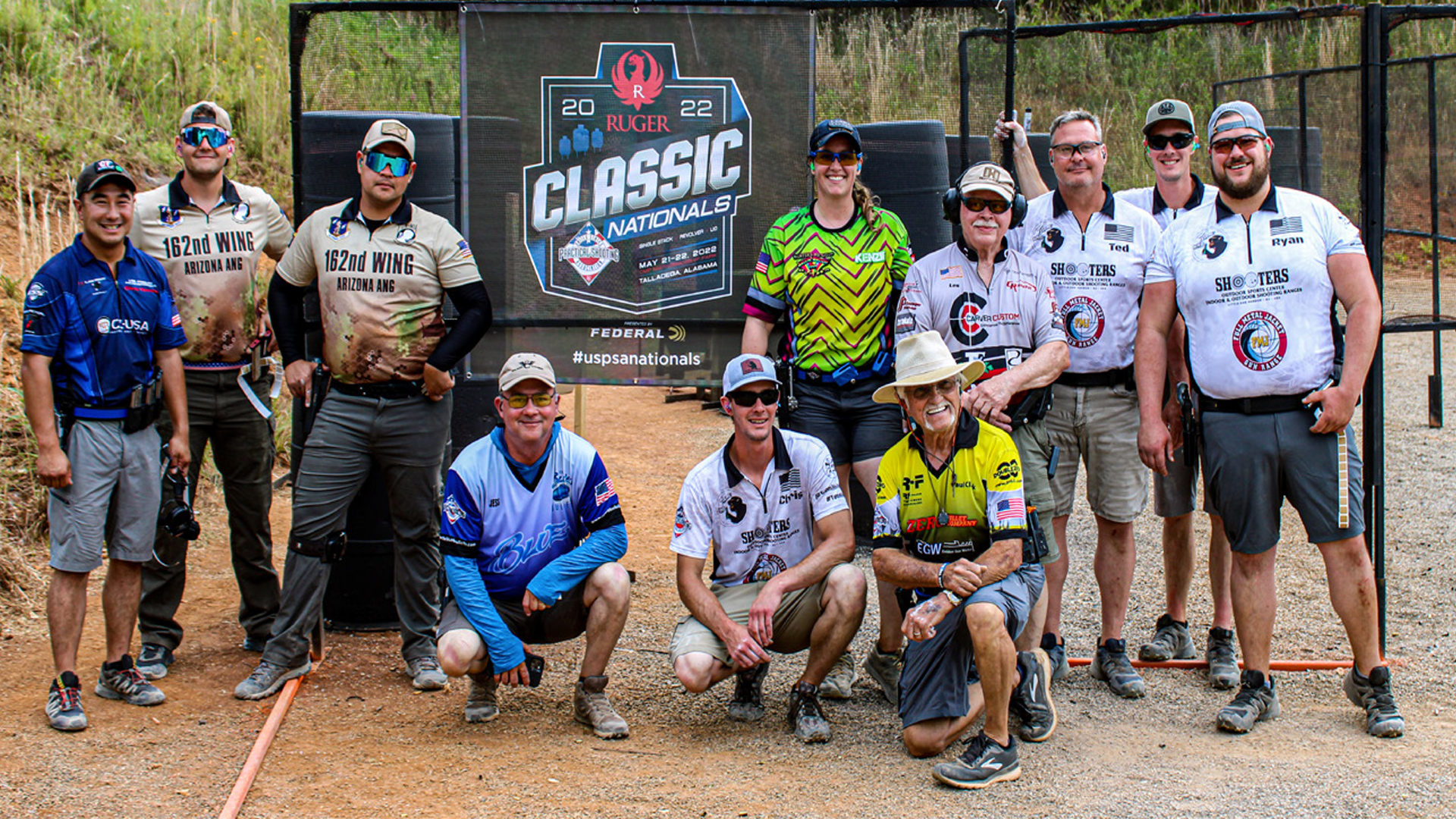 The author (standing, fourth from left) with her squad at the 2022 USPSA Classic Nationals.

Stages 6 and 7 were my favorites at the match. Stage 6 was a 15-round stage with seven IPSC targets and one popper. The popper activated a slow-moving bobber target. The start position was feet touching marks, but the stage could be shot a few ways after the beep. I chose to engage the target behind the barrel on the left as well as two targets you could see in the second position downrange. Then I moved to engage one target you had to shoot through the window and the target on the outside right before making a reload. To finish the stage, I double tapped the popper to activate the bobber quicker, shot the bobber and leaned left to shoot the final target to the right behind a wall. This quick stage was a blast to shoot.

Stage 7 was set up with the handgun unloaded and cased in a hard case with the lid closed. The initial loading device had to be placed on top of the case. This stage was 16 rounds with seven IPSC targets and two poppers. Depending on your stage plan, targets could be engaged in different positions, so it was friendly to both minor and major power factor. There’s always added pressure with props you’re unfamiliar with or don’t practice with often, which just adds stress to the start of the stage.

Stage 11 was the visual start stage with a shooting box, table and chair. Competitors started with their handgun loaded on a mark with all loading devices staged on the table. The start position was seated in the chair with hands on knees. Upon the visual start, competitors engaged two targets with four rounds each, then performed a mandatory reload, and engaged the remaining two targets with four rounds each. If you’ve never experienced a visual start, it is a true test of your reaction time. The simplicity of the visual start created tension and felt like waiting on a red light to turn green.

Stage 15 was a fixed-time stage with two strings of fire from two shooting boxes (Box A farther away than Box B). Both strings were seven seconds long, had four IPSC targets and was a total of 24 rounds. From Box A, competitors had to engage each target with only two rounds, perform a mandatory reload, and engage each target with only one round strong hand. From Box B, competitors had the same course of fire, except finished weak hand only instead of strong hand. I learned that seven seconds goes by quickly and never made it to the weak hand portion.

The 2022 USPSA Classic Nationals included 22 women competitors combined in Limited 10 and Single Stack divisions. This year, the Williams sisters won the Women’s’ titles in both divisions; Jalise shot Single Stack and Justine shot Limited 10. “I wanted to come back this year and defend my Ladies title win from last year’s Limited 10 Nationals and I did just that,” said Justine Williams.

“This match was very challenging for all levels and was well put on. I’m very excited to come home with a win and make my family and friends proud,” Jalise Williams said about winning her title. “I love Single Stack so much. [Happy] to reclaim this title and honored to win it once again.”

I was lucky to shoot on an opposite schedule as the Super Squad and higher-level competitors which gave me a chance to watch them compete. On the final day of shooting, I watched every pro shooter shoot Stage 8, which was fired one of two ways. One of the largest stages with 28 rounds, there were three shooting positions you had to go to—no matter what. The stage was shaped like an upside down “T,” but with a slight curve at the top downrange. I watched Nils Jonasson, Elias Frangoulis, Jonathan McClain, Tim Herron, Phil Strader, Mike Seeklander and more burn down this stage. The start position was in the middle of the top of the “T” and most shooters went far left first, downrange to the forced shooting position, and then retreat up range, running around a wall back to the right of the “T” to finish the stage. Tim Herron, being a leftie, ran this stage in the opposite sequence, but still retreated uprange to finish on the left side. Few pro competitors shot the right side of the “T,” then the left side, and finished downrange. Watching the top-level competitors compete gave me the confidence to try running the stage plan with an uprange retreat. Not only did I run the stage in the same fashion, but so did most of my squadmates after I showed them the plan. This stage was my favorite at the 2022 USPSA Classic Nationals and one of my all-time favorite stages I’ve ever seen.

The 2022 Classic Nationals concluded with Mason Lane as the Limited 10 Champion, Michael Poggie as the Revolver Champion and Nils Jonasson as the Single Stack Champion. 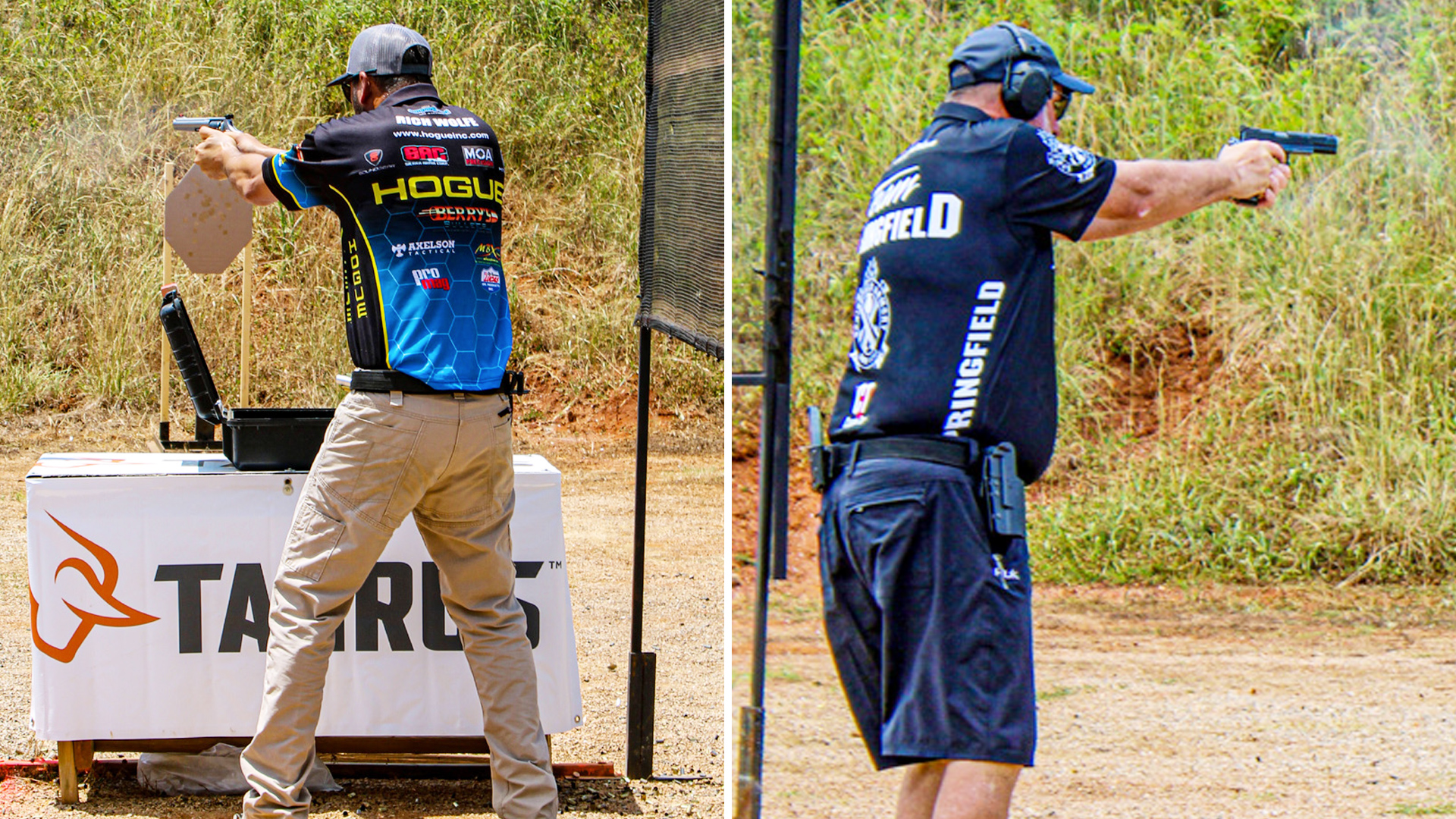 On the left is Rich Wolfe, and to the right is Rob Leatham.

Here is what Single Stack Champion Nils Jonasson said about the match. “It was an absolute pleasure shooting on the Single Stack Super Squad once again. Shooting with Dave Sevigny after four-plus years as well as Rob Leatham, Mike Seeklander, Phil Strader and others, really made this match fun and memorable. The match itself was one of the more difficult Single Stack Nationals I can remember. Lots of risky arrays with partial targets and small steel posed a challenge, regardless of skill level. My performance started quite rocky on one of those risky stages, which literally ended with me laughing as I walked off the stage because it went so badly. After that I hunkered down and shot my sights, shooting each stage as consistently as I could.”

It is quite fun to watch the best revolver shooters in the world compete at the National level. It’s even more exciting to watch most all the top competitors all squadded together, battling it out for the win. “This year’s match came with a lot of distractions for me, and I had to heavily rely on my mental and psychological preparations compared to my more typical rigorous physical preparation,” said Revolver National Champion Michael Poggie.

While you wouldn’t have known by talking to him or watching him shoot, Mason Lane showed up at the USPSA Nationals and won, despite having lost his father a few days before the competition. For most competitors, this would cause a mental distraction that would greatly affect how they shot, and no one would fault them for it. The amount of mental discipline Mason had to win USPSA Classic Nationals with this in the back of his mind is something that I will always remember. What Mason accomplished is something I know his dad would’ve been proud of.

I asked Mason about how he felt about winning the title with everything going on in his life, and this is what he told me: “My dad passed away four days before USPSA Classic Nationals from Lewy Body Dementia. He was instrumental in my development as an individual and a shooter. I’m tremendously grateful for him and the other mentors and supporters I’ve had over the years. I’m happy to be able to celebrate their trust in me with a win. Thank you to my close supporters: both of my parents, my wife Kaylee, Phil Strader, Jerry Tetreau, Ben Stoeger and to my sponsors: SIG Sauer, Grayguns and Blue Bullets.”

I learned a lot this year at USPSA Classic Nationals, enjoyed shooting with the squad I was on, and am thankful to have had the opportunity to see legends in the shooting industry do what they do best. If you’re a 1911, 2011 or revolver fan, I suggest you look at shooting it more, as it is as fun as it is challenging.

Article from the July/August 2022 issue of USPSA’s magazine.