A living legend will coach the United States Pershing Team this summer during the 2022 NRA National Matches at Camp Atterbury. Retired U.S. Army Colonel Bruce Meredith, age 85, has accepted the offer to lead the 2022 U.S. Pershing Team that will compete against the British shooters traveling to Indiana in August for the Pershing International Trophy Match.

Meredith says he looks forward to “welcoming the visiting shooters from abroad” to Camp Atterbury, Indiana.

He is certainly up to the challenge of coaching the U.S. Pershing Team, boasting 71 years of smallbore rifle experience. The late SSUSA author and rifle competition historian, Hap Rocketto, said about him: “Octogenarian Bruce Meredith began shooting competitively in 1951 at Linsly Military Institute in Wheeling, W.V., where marksmanship was a mandatory class. While there, he earned the NRA Distinguished Expert Award. Meredith then attended West Virginia University, where he helped lay the foundation for West Virginia’s rifle shooting powerhouse squad that still garners accolades to this day.” 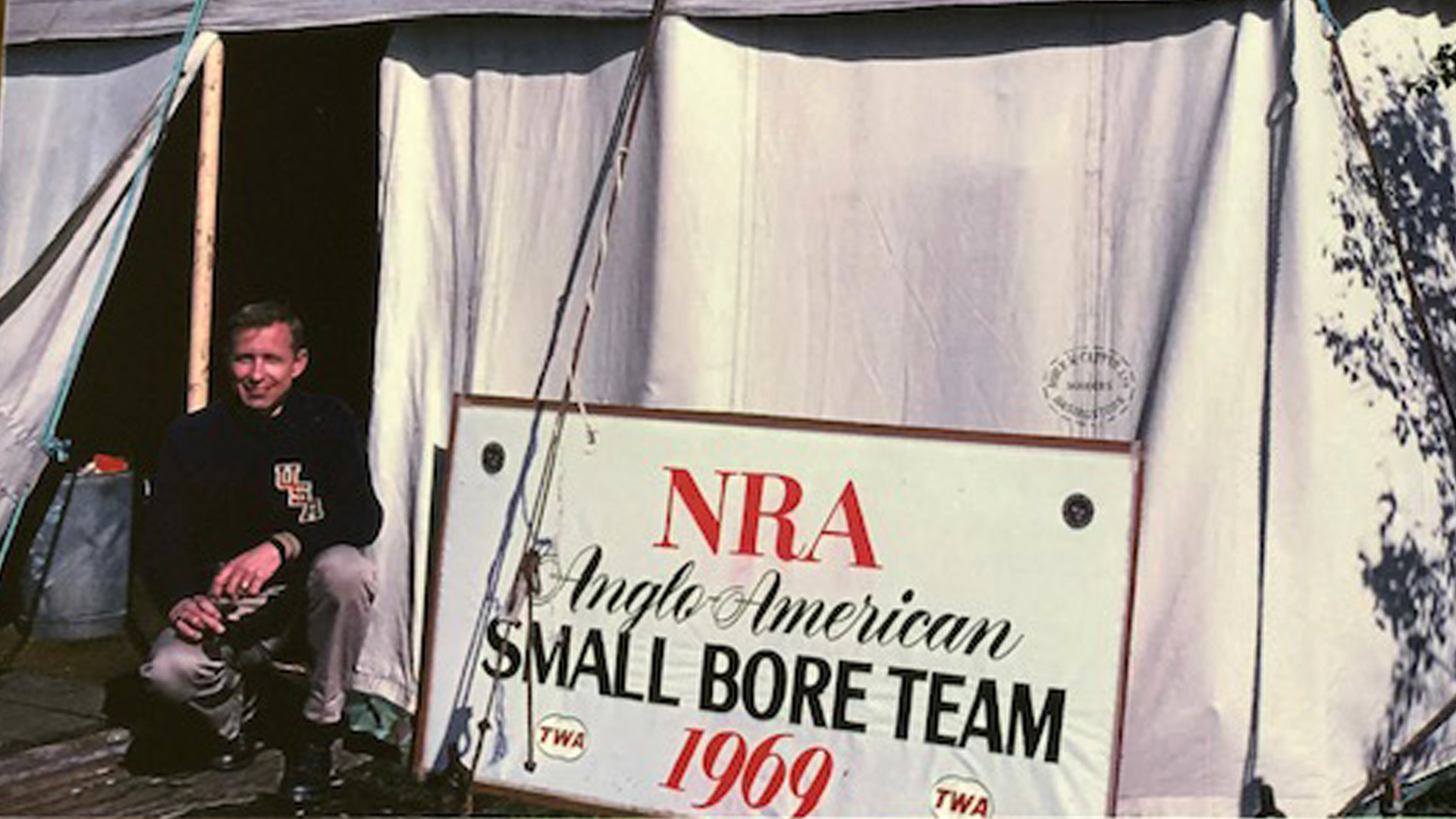 Here is Bruce Meredith kneeling by the U.S. tent in 1969 at Bisley, England. The team was known as the “Anglo American Small Bore Team” until they arrived, when they learned the British had decided on a new name—Lord Earl Roberts Match.

Additional accolades for Meredith include winning the 1967 National Smallbore Rifle Prone Championship (firing the first any sight 3200 score in the event’s history) and, as a member of the first U.S. Earl Roberts Team that traveled to Bisley in 1969, he won the News of the World Trophy. Along the way to rifle competition superstardom, he also earned his Distinguished Rifleman Badge and Presidents Hundred Tab.

During the Sydney 2000 Olympic Games, Meredith held the distinction of being the oldest athlete to compete that year in Australia at the age of 63.

With his long and impressive rifle competition career, in 2004 Meredith was inducted as a member of the West Virginia University Sports Hall of Fame. A two-time rifle All-American, in college he also lettered from 1958 to 1961.

While attending the NRA National Matches at Camp Atterbury this year, Meredith plans to shoot pistol, along with officiating as coach of the 2022 U.S. Pershing Team.

About the Pershing Trophy Match

Held every four years, the location of the Pershing Trophy International Team Match alternates between the United States and Great Britain. From the 2022 NRA National Matches program: “The Pershing Trophy Match, named for General John J. Pershing, the Commander of the American Expeditionary Forces in World War I, has been competed for in international shoulder-to-shoulder competition since 1931. In 1969, the British counterpart of the Trophy Match was established as the Field Marshal Earl Roberts Trophy Match.”

Targets used are those of the host nation, which means this year it will be the Dewar course on A-23-6 and A-25 smallbore targets.

The United States previously won this international match in 2017 at the Bisley Range in Great Britain, and holds the advantage in the series with 15 victories. (The competitions in the series are known as the Field Marshal Earl Roberts Trophy Match while in England, and the Pershing Trophy Match when held stateside.)

In 1969, Bruce Meredith competed with the first U.S. Roberts Team in England, known at that time as the Anglo-American Smallbore team. He shared a story about a special fun match fired at Bisley Camp in England that year. “[It was] four of us vs. four of the British team. It was iron sights, about 100 yards,” Meredith explained. “They had a series of shotgun clay targets hung on a board and the first team to break all the targets won … We shot in the prone position with right leg drawn up in the position we taught, which the locals called the ‘Vietnam crouch.’ We had all the targets down in a flash, except one. We shot a volume of bullets at that last target and could not break it. We lost. To this day I think they put up a rubber target for the Yanks. Being good guests, we never said a word or asked to go inspect that target.”

In addition to 10 firing members, each country’s team includes a captain, coach, adjutant and two alternates. Tryouts for the 2022 U.S. Pershing Team will be conducted at Camp Atterbury this year during the NRA Smallbore Rifle Championship. The 10 firing members and two alternates will be selected from the highest combined score of the NRA Conventional Pone Smallbore National Companionship Metallic Sight Aggregate and the Dewar Team score. NRA Board Member Patricia Clark will serve as team captain, along with Bruce Meredith as coach and Shawn Carpenter the adjutant. (Clark also served as captain of the U.S. Roberts Team in 2017.) These key positions are appointed by the National Rifle Association of America’s Smallbore Rifle Committee and are not firing members.

Since the British competitors traveling to the United States this summer have never competed at Camp Atterbury, they will be conducting tryouts of their own alongside the Americans.