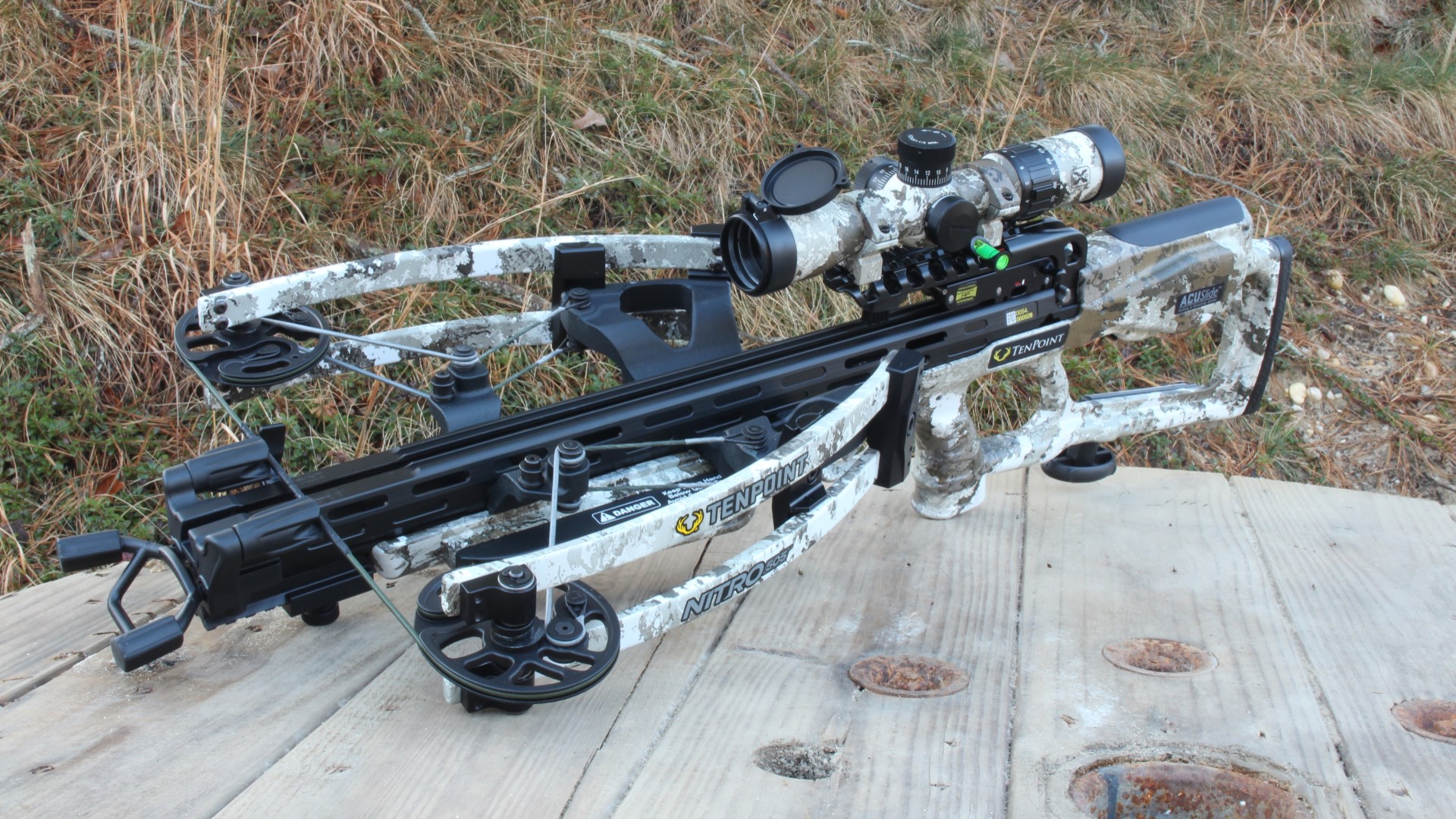 A few years back, I was hunting in a particular jurisdiction where archery deer and fall turkey overlap. As I looked up from admiring the shiny new shotgun that I was evaluating, a monstrous doe stepped out of the woods, and of course, I had yet to punch that tag. Immediately I thought, “gee, I wish I had a bow for situations like this,” as I watched her eat, mull around and eventually take off. Up until this point, firearms have been my tool of choice and a defining part of the hunting experience. However, as the goal is to leave the woods with meat, I decided to dip a toe into the stringed market, particularly crossbows.

My first choice? The TenPoint 505 Nitro, which just claimed the title of the fastest crossbow on the market. The reverse-draw design of the 505 yields more power than a forward draw, while retaining a lighter draw weight and a more rearward balance point. “Go big or go home” was the word of the day.

I was taking a bit of a risk there. I may be an expert gun handler and instructor, but when it comes to archery, I’m as much a newbie as the millions of Americans who bought their first gun during the COVID-19 pandemic. Needless to say the initial unboxing was a bit intimidating.

To my delight, TenPoint includes an incredibly thorough owner’s manual and links to instructional videos, making it easy to understand its basic operation and the do’s and don’ts. Above all, this material made it obvious that the string system could be dangerous, even including the word “amputate” when referring to misplaced digits. It was adamant that the user must keep their hand away from the string and pulleys at all times, even if it is “uncocked.” Right off the bat, I likened it to the muzzle of a firearm. I wouldn’t go waving my hand over a rifle barrel even if it was “unloaded,” right? (Editor’s Note: For more crossbow safety tips, click here to watch this video!)

The cocking system of the Nitro 505 is unique as it incorporates both safety and ease of use into a user-friendly package. Naturally, one might fear slipping as the high-tension string is drawn; however, the Acuslide system prevents this and requires just 5 pounds of force to crank back. To put it into perspective, that’s only three fingers’ worth of effort. Additionally, the user can stop anytime during the draw, and I took advantage of the feature a few times as I referred back to the manual to confirm that I wasn’t missing anything.

I really liked that the shooter isn’t fully committed once they start the cocking process, as simply turning the crank the other way will decock the crossbow. Should your hand slip during de-cocking, don’t sweat it, as the crank system is under control the entire time and won’t spin independently. After experimenting a little more, I brought the 505 to full draw, stowed away the crank handle, set an arrow into the flight groove, and began my journey into uncharted territory.

From my 20-yard shooting position, I peered through the glass and centered up on a well-used archery bag. The 505 Nitro comes with a few different sight options, and mine wore the Evo Marksman Elite 2-8X scope. This scope features arrow drop compensation that is based on the scope’s magnification. For this crossbow with its 500+ FPS velocity, these markings line up at 8x when the central crosshair is zeroed at 20 yards. The reticle contains additional markings for distances out to 100 yards and can be illuminated in either red or green by spinning the dial on the left-hand side. After tweaking the fast focus ring, I rested on my range bag and let off my first arrow.

The first thing I fell in love with was the trigger, which broke at just 3.5 pounds. As reverse-draw technology puts less tension on the trigger, the result is nearly always something lightweight. My second observation was the complete absence of any noise or recoil, making me wonder if I would shoulder 3″ turkey shells ever again. My smile grew further when I peered at the display on my Caldwell G2 chronograph, which read 507, surpassing the advertised velocity by 2 feet per second. As the arrow impacted a little high and right, I shot a few more to zero it in, tabulated an average velocity of 512 FPS, and then moved to 30 yards to check the first stadia and start shooting some groups.

After wheeling back my shooting point, I settled in and started shooting three-shot groups using that holdover point and confirmed that not only was it on the money but darn consistent too. Every group was well under 2” using the standard-ish Pro Elite 400 Carbon Arrows, and ironically my best group of the day was also my worst group of the day. While it measured just shy of 1.25 inches, on the way in, the third arrow hit the nock of the previous one, ripping off its vane in the process. I Robin Hood-ed an arrow, felt like a champion, then remembered I had managed to wreck two arrows in one fell swoop. I guess that bag has nine target spots for a reason; lesson learned. I finished off my range day by retreating in 10-yard increments to check the remaining stadia, all the way out to 100 yards.

I only experienced one issue throughout the entire process, but it was undoubtedly user error. It came in the form of not pressing the trigger box firmly enough into the string before starting the cocking process. I noticed it when I couldn’t seat the arrow completely, which threw up a red flag. Reverting back to the decocking procedure, I was able to let the string back down, press it into place, recock and redraw. The intuitiveness of this design was deeply appreciated, as “something being wrong” is easily recognizable, even to a complete novice.

The TenPoint 505 Nitro is one fantastic piece of kit, and although I have nothing to compare it against (yet), I didn’t see anything left to be desired inside the realm of crossbows. Getting started was easy; it was nearly as accurate as any hunting rifle that I have ever fired, and there was zero fatigue associated with shooting it for several hours. After getting home and sitting for a while, I had that same yearning to do some more shooting, which, if my firearms experience is any indicator, means that I might have just sparked a new obsession. MSRP $3,149, visit tenpointcrossbows.com