The 2022 USPSA Area 6 Championship, held April 7-10 at Rowan County Wildlife Association in Salisbury, North Carolina, exceeded my expectations. Last year’s event was held at the same range and, while it was a good match, there were major improvements this year that made things flow much better.

This is the second match I’ve been to this year where the weather swung from rainy and warm to nearly below freezing with high gusts of wind.

The 12 stages at USPSA Area 6 this year were fun ones that looked deceivingly easy, but turned out to be challenging. I was on a split day squad shooting Saturday p.m. and Sunday a.m. After shooting the 2022 USPSA Alabama Sectionals in 75 degrees and rain, I prefer that to the Saturday at Area 6 with a wind chill that made it feel like 35 degrees—not to mention the drizzle beginning late in the day and rain later, as I was the last person shooting a stage on Saturday. 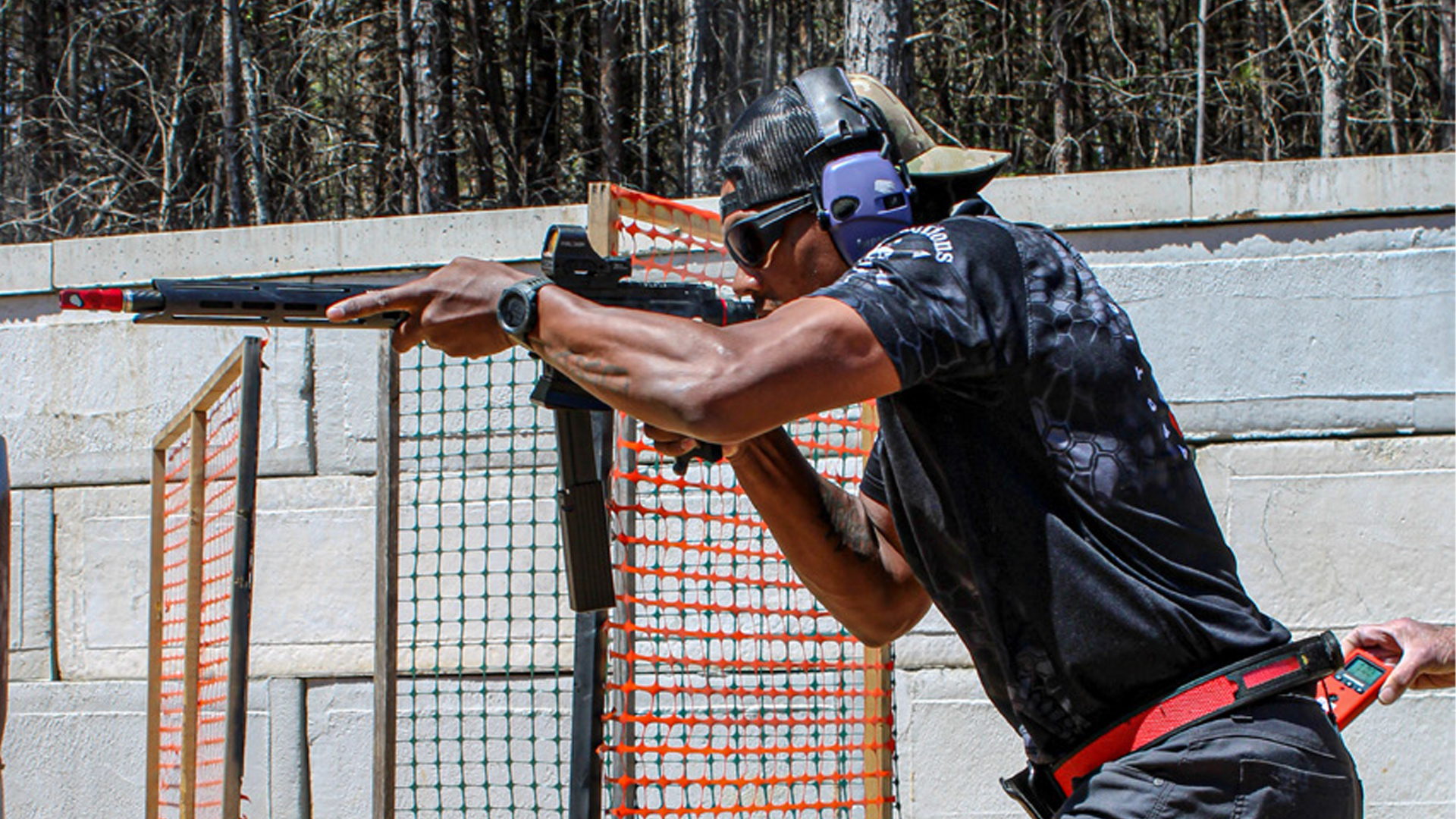 Each stage presented a unique challenge—no matter what division you were competing in. A big factor to the difference in stages is how many different stage designers were involved. Area 6 had stages designed by Aaron Banks, Bryce Dupuy, Gerrit Heinrich, Robert Walker, Drew Coleman and Ike Starnes. As USPSA grows, it’s important for new members and some veteran members to remember that it takes a village for a USPSA match to take place, from Level 1 matches, all the way to Nationals. This year, Area 6 included competitors, range staff, vendors, a photographer, on-site food trucks, different stage designers and more.

“Donna Webb, our match director, and staff were awesome. My job was made easy because of their professionalism. The sponsors were generous and numerous, as were on-site vendors. Our match gave competitors time to visit with each other and check out the vendor tents. It was great seeing our shooting family together once again,” said USPSA Area 6 Director, Bruce Wells.

KC Eusebio secured the High Overall title with a final time of 118.44 seconds, also garnering high stage scores for five of the 12 stages.

At every match I attend, one thing is certain—Carry Optics division is where the competition is. This year’s USPSA Area 6 Championship was no different. Carry Optics division had 157 competitors show up, with even more who were registered. USPSA made a huge leap forward by hosting a solo Carry Optics Nationals this year. While Max Michel (126.58) took the win at Area 6 in Carry Optics, JJ Racaza was just one point behind him.

“Match Director Donna Webb with her experienced team pushed an already high USPSPA Area 6 bar even higher. Every component of a quality Level 3 tournament was present; excellent preparation and communication with competitors, on-site attention to detail, vendors, competitor concessions, scoring accuracy and printouts, staff reset and clearance time. All of it was noticed and appreciated,” said Sevigny. “It was a fun course of fire that tested a mix of skills for every level and division. There was just enough there to make you work in certain places to earn those As. I used a Harrison Design and Consulting 1911 with Atlanta Arms Elite 9 mm 124-grain JHP, an extremely accurate and soft-shooting combo. I look forward to training with it more this spring.”

Production division also saw fierce competition, with Nils Jonasson walking away with the Production victory (148.20). “Compared to Area 6 last year, you could say the stages were a little easier and more simplistic. On the surface you could argue that an area match should present a higher degree of difficulty; however, this match allowed a less experienced shooter to easily complete the entire match without feeling overwhelmed on any particular stage, while still allowing the Super Squad guys areas to shoot on the move and blend positions along with plenty of options when stage planning,” said Nils. “The match was run on schedule and the Range Officers and staff were extremely courteous. Running the new Canik SFX Rival in Production division, my thought process going into this match was ‘shoot points,’ which paid off by being most accurate in Production and division champ. Looking forward to next year.” 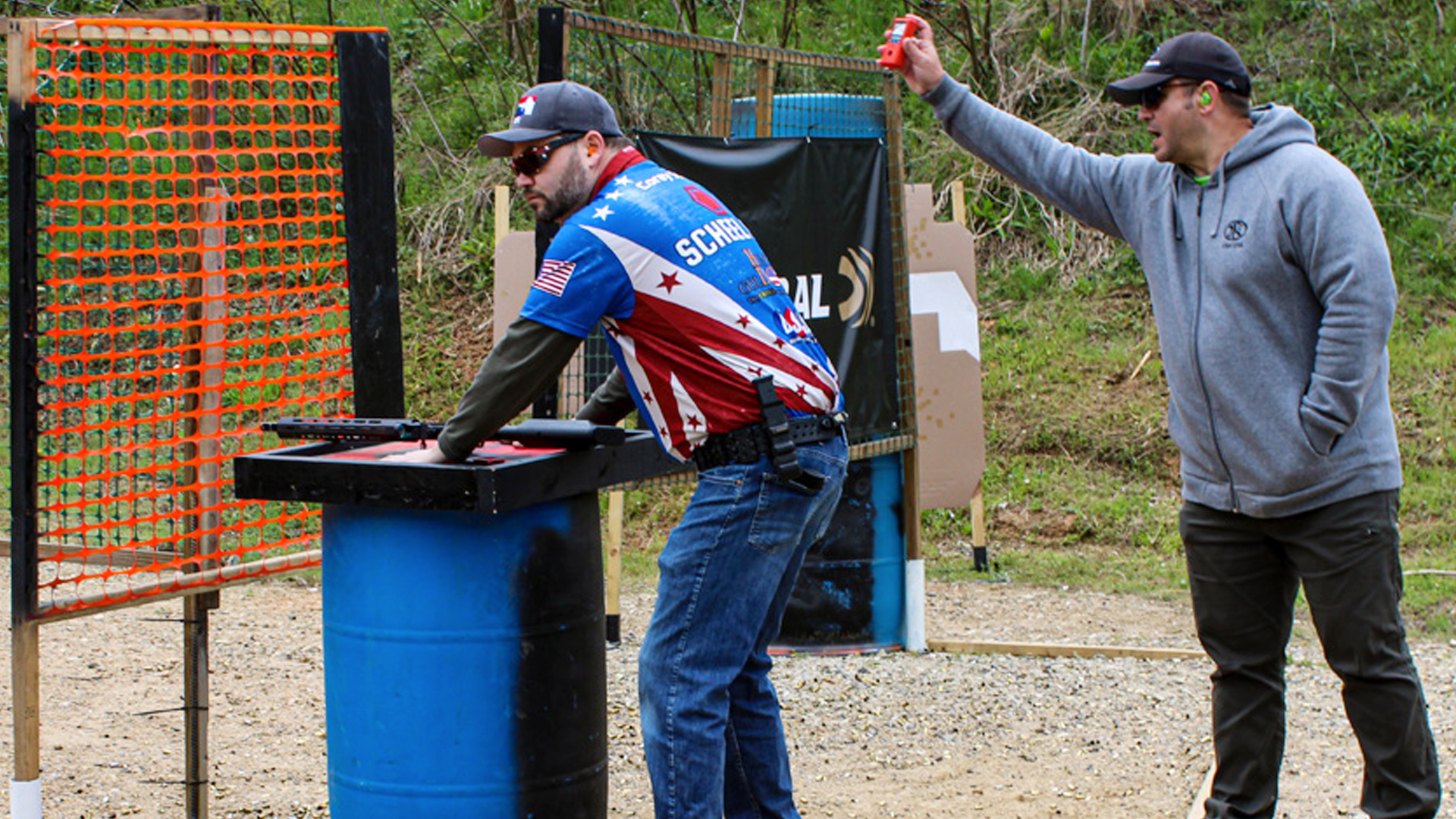 Competing in the PCC division, Corey Scheel finished in 24th place in the overall field.

Brian Harrington smoked the competition in Pistol Caliber Carbine to secure the division win (131.69). “I stuck to my game plan of ‘just shoot alphas’ for this match, coming off a hard stop over this past winter. My goal was 95 percent alphas and zero penalties. I came close. Rowan County held a great match for Area 6. I really appreciate the staff for their work, especially pasting. The weather was perfect, and it was great to get back to shooting majors and seeing friends,” said Harrington.

The one stage that was talked about the most was Stage 12. While any shooter can DQ on a stage, and a few stages toed the 180-degree line, nothing was as challenging as this stage, which allowed the shooter to start anywhere in the shooting area. The catch: the only way to activate the fast-moving swinger was downrange from one shooting position. Most pistol shooters activated the steel downrange, and moved up range to two final shooting positions, engaging the swinging target last when it was moving the slowest. Many shooters would move from activating the steel to the middle section where two paper targets presented themselves, one that could be engaged at over 180 degrees if you weren’t careful. I competed in the PCC division and moving from that first position backward to the middle much higher DQ risk than with a pistol. Thus, many PCC shooter plans were to start up range, activate the popper in the last position, engage the two static paper targets from that position and come back to the swinger last. It was better to run this stage that way than earn a DQ and end your match.

One of my favorite stages was Stage 10, the Speed Shoot. This stage had one open target and two steel poppers. The right popper activated a swinging target and the left activated a drop turner disappearing target that only presented itself once. These kinds of stages either go really well or really poorly for shooters, and it’s all about timing, plus not missing the steel activators. One miss on steel can throw all your timing off, and you must make up a new stage plan on the fly. A few shooters decided not to engage the drop turner, because the no-penalty mikes didn’t cost them anything. Other shooters needed the points, and threw some Hail Mary’s to get their hits. I saw this stage shot so many ways, which is why I enjoyed the stage design. A good stage in my opinion is not prescriptive, but allows shooters to tackle it to their ability. I shot the left popper, right popper, drop turner, swinging target and finished on the open paper. I knew I needed points, as it was my third-to-last stage, so I wanted the hits on the drop turner target. Worried about missing the presentation, I ended up waiting one to two seconds for it to present, rather than taking a risk on missing it by engaging the other targets before. The faster way to shoot the stage (if you had the skill) was to shoot the right popper, left popper, open target, swinging target and finish on the drop turner. The top shooters were right around three seconds for a stage time, while I shot it in four seconds.

One thing that stood out to me this year was vendor participation and how clean their area looked upon arrival at the range. The vendors who set up at the range were Hunters HD Gold, Davinci Machining, PremEAR Hearing Protection, Go Fast Don’t Suck, Southern Bobby-Q Catering, Outdoor Dynamics, Aardvark and Cosaint Arms. It was incredible to see so many vendors all in one place at the range, with so many shooters supporting them.

“Area 6 this year was a blast. Donna put on a great match and came by the vendor area three to four times a day to make sure everything was great for us. If you are in need of a match director in the Carolina Areas, then Donna would be top of my list,” said Brian Conley, the president of Hunters HD Gold.

“From my perspective as an outsider, I thought the management of the match by Donna Webb was done well. There were plenty of well-trained Range Officers and a lot of effort went into getting sponsors to show up as vendors,” said Bill Duda, owner of Go Fast Don’t Suck. “In my not-so-quiet opinion, the atmosphere created by those two things makes the match so much more fun for the weekend warriors coming to pit their performance against the best the area has to offer. Having as much of the USPSA leadership and running candidates as Donna could persuade to come was great. I got to shake hands and duck punches from a lot of source material over the last few months. I saw nearly everyone having a great time and shooting as well as a spring championship might allow. I’m looking forward to [next year] already.”

Area 6 was a class act with regards to signage on the range. Each stage had a stage flag, including the chrono area, making it easy to navigate where you needed to go. It was nice to see other banners that had the names of range officers and stage designers who contributed to the match. The little details are what made this match so professional and a refreshing experience.

You can view the full results of the 2022 USPSA Area 6 Championship via Practiscore here.

Article from the May/June 2022 issue of USPSA’s magazine.